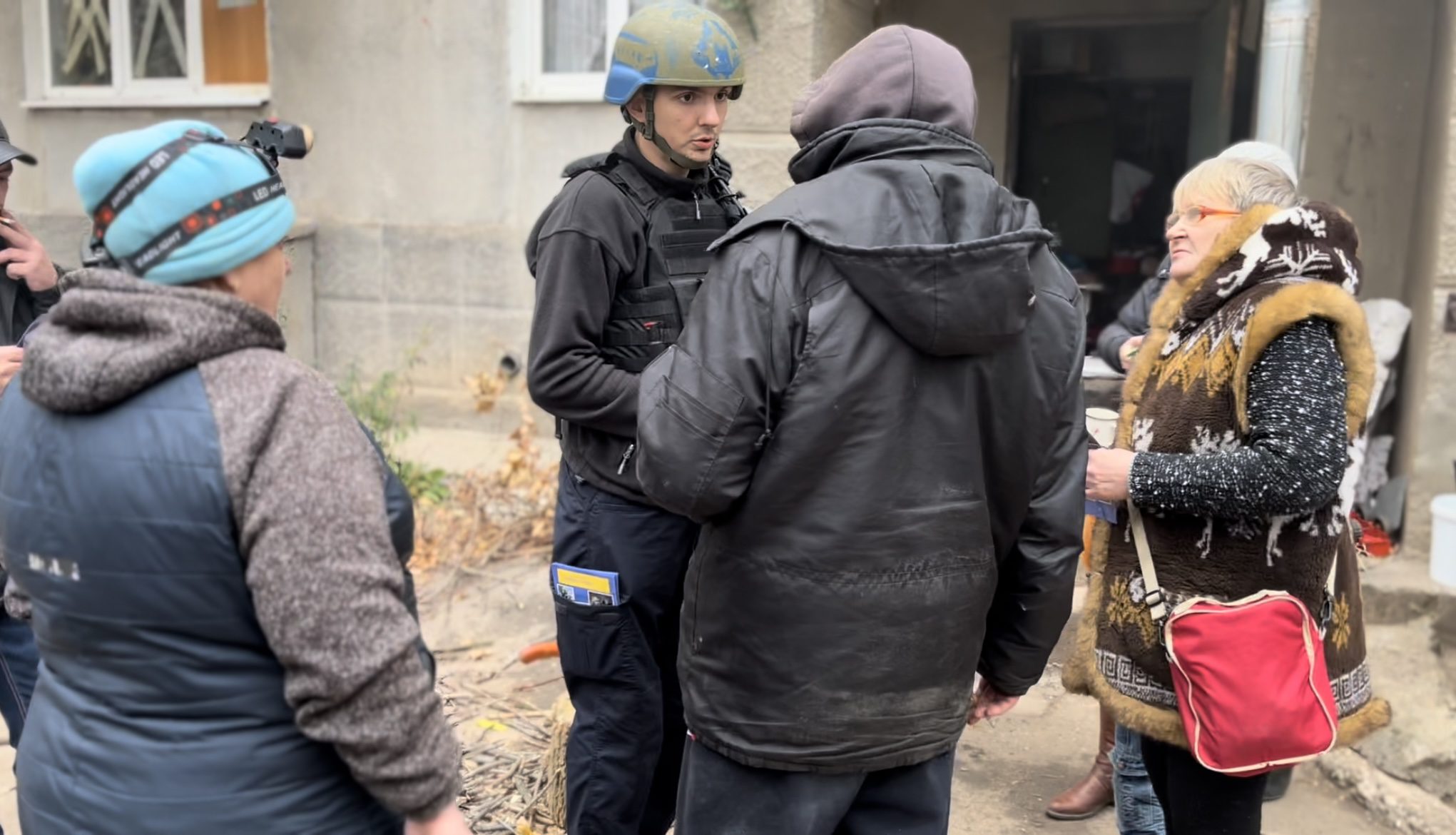 Oksana is standing at the entrance of a bomb shelter. It is cold, the air is damp, the surroundings a battlefield of metal. The area where Oksana is waiting for us is a combination of a junkyard and a car repair shop. Layla, her Chihuahua puppy, is tied to her chest with her jacket. The woman holds a cigarette in one hand. With the other she supports her dog.

Oksana is one of our guests. She lives in Bakhmut. But the city in the Donbas region is currently considered a hotspot of Russian offensives. When we arrive, Layla starts yapping. The black-haired woman laughs and strokes her trembling dog. That day we will evacuate 15 people from Bakhmut. Oksana will be one of them.

Shuttle from hell in the east

But for now she waits in this basement. There is hardly any light. Only a small, battery-operated LED light chain hangs from the two-meter-high ceiling. Until Andreij, the owner of this area in the south of the city and partner of our organization, switches on a generator. It rattles and hums. So loud that it almost completely overshadows the sounds of war. But it helps against the darkness. Against the cold. On this day, the temperatures are only slightly above freezing.

Now it’s a matter of waiting. Two of our team members have driven to the eastern part of Bakhmut. They crossed the river that separates the western and eastern parts of the city. Bakhmutka is the name of the river. In the east, the war rages more fiercely than anywhere else in the city. The way there is a total risk. Mud holes, unexploded artillery. The bridge offers a clear view for any possible attacker.

We have several requests for evacuations in the east of Bakhmut for this day. Since we cannot drive in there with our vans, we have to use a smaller vehicle. Two of us head into this hell. Get people out step by step. A shuttle to the bombshelter in the south of the city, then back inside to the east. And back again to the garage. Where Oksana is waiting.

There, where two other team members of ours are also waiting. When a passenger arrives, we help him or her with the pastries and immediately send them to the basement. After all, the bullets we hear continuously could land on us at any time. We are not far from the front line. Two, maybe three kilometers. We hear machine guns, and it’s hard to tell whether the artillery is just being fired outside or flying into the city. Both fighting sides are too close.
And we are in the middle. We hear the shells fly over us. We see where they hit the city. The target is obviously a transmission tower on a hill, which we can observe well from our shelter.

At the same time, our team shuttles more passengers to us hour by hour. The bombshelter fills up bit by bit. The Chihuahua puppy scurries back and forth between the waiting people. Layla is nervous. The impacts can be heard clearly even behind the thick concrete walls. Despite the emergency generator. The animal is looking for food – and finds it. In this cellar, people have been sleeping, cooking, living for weeks. In one corner Layla finds a plastic bowl with the remains of a vegetable stew.

After four hours, we are almost complete.

Explosion right in front of us

Almost. We still have to reach an address in the west of the city. A 71-year-old bedridden woman is waiting there. We start our van and are already tensed. For we can hear the shells coming closer and closer. Just one second – and the mission could have failed. Just one second and it could all be over. One errant shell, one hit.

We’re going fast. Out of the garage. On to the road. The Land Rover that was previously on the road to the east is right in front of us. We, with our passengers, are following. We turn off, to our right is the inner-city expressway of Bakhmut. This should be our way. As we drive along it and step on the gas, we notice the transmission tower. Exactly there the Russian artillery had aimed before.

We don’t even have time to react. Already we see it. The impact. The explosion. 100, maybe 200 meters away.

We’re in luck. Nothing but luck. If we had started just 30 seconds earlier, this projectile would have hit us. And if it hadn’t, we probably would have run into a rain of deadly shrapnel.

We take a different route to our bedridden guest to the west. Four of us carry her into our van amid the din of artillery fire.

We missed the train from the Donbas to western Ukraine. We take all the evacuees to Slowyansk. There they can spend the night.